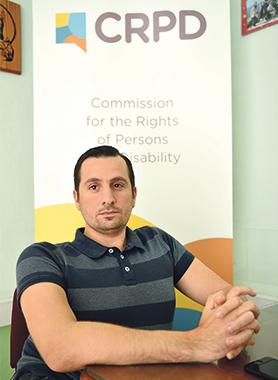 Why is dating someone with a disability still taboo?

The image of a wheelchair is the first thing that comes to mind when thinking about disability, but behind that wheelchair there is a person with needs just like any other human being. Oliver Scicluna wants to start a national discussion to break the taboo about sexuality, intimate relationships and disability, writes Sarah Carabott.

The social barriers to having sex and healthy relationships are painful to several people with a disability, some of whom might be resorting to dangerous or illicit means to fulfil these needs.

“I know of people who were finding it so difficult to enter into a relationship that they resorted to sleeping with women in prostitution and contracted sexually transmitted diseases,” the Commissioner for the Rights of People with Disability told this newspaper.

“One person eventually passed away because of this. Others take out adverts asking for people to go out on dates with them,” said Oliver Scicluna.

“Another person resorted to marrying a non-Maltese woman on condition that she carries out everything he asks of her, thus leading to exploitation.”

Such cases made it even more pressing to speak about sexuality, intimate relationships and disability, he said, adding that there were parents who had even considered paying a woman to sleep with their children.

From the moment he sat in his chair at the CRPD, Mr Scicluna started hearing these frustrations expressed by people with a disability, whether physical, sensorial, intellectual or invisible.

Although he is happily married and has a son of his own, Mr Scicluna, born with spina bifida, wants people to start talking about the subject and professionals to start providing solutions.

He was speaking to The Sunday Times of Malta ahead of a conference organised by CRPD later this month about sexuality, intimate relationships and disability.

Called Breaking the Silence, the event will feature English sociologist and broadcaster Prof. Thomas William Shakespeare and will be streamed online for those who cannot make it.

This is the first conference of the sort, which he hopes will get people talking about the issue, which is so frustrating to many people with a disability, he said ahead of Invisible Disabilities Week, this week. Mr Scicluna believes it boils down to lack of knowledge and awareness, and he has experienced such fear himself.

“It is still taboo for someone to date a person with a disability… my in-laws were initially reluctant when I started going out with my wife, but the coin soon flipped over when they got to know me as Oliver.

“Even my own parents initially understood my in-laws’ concern, as they believed I could not become a father.”

This is one of the barriers that Mr Scicluna had to overcome himself. Many still consider disability a genetic disease that is hereditary, and he spent his whole life being told he could not have children.

“I actually started believing it, but I knew there was no scientific proof that it is genetic. In fact no one from my family had spina bifida.

“When my wife got pregnant we were told of a possibility that our son would be born with spina bifida.”

But Mr Scicluna’s son was not born with spina bifida. While his own ordeal is over, he does not want others to go through what he did.

“There are people who are attracted to others who happen to have a disability. Unfortunately, they give in to such social constructs and do not even go out with that person.

“I want to normalise the issue, and hopefully this would eventually pave the way for sexual health services.”

According to Article 25 of the UN Convention on the Rights of Persons with Disabilities, the State should provide people with disabilities with the same range, quality and standard of free or affordable healthcare and programmes as provided to others, including in the area of sexual and reproductive health.

What happens when people with a disability seek advice from professionals about sexual health?

They feel uncomfortable, especially if the disability is intellectual, Mr Scicluna explained.

“We need to break the taboo. While not everyone – whether they have a disability or not – can enter into relationships, we need to start discussing this issue for better understanding and acceptance.

“We cannot keep talking just about physical access, education and employability of people with a disability, but about such issues as well.”

Mr Scicluna started trying to break common misconceptions at schools. When he is invited over, he does not introduce himself as a commissioner, but as a married man, who works and is a father.

Because of the local mindset, the marriage of a person with a disability is seen as a big deal, and the fact that they have children is an even bigger issue.

“Sadly, at times, marrying someone with a disability is even perceived as some sort of charity. There was a TV presenter who actually said my wife did a benevolent thing when she married me.

“There is no charity in marriage – there are sacrifices on both sides. We need to start talking about the issue in order to change the mindset.”

Look up the Facebook page called Commission for the Rights of Persons with Disability – CRPD to follow the event on October 30.